In this month's summary, Ben Black looks at the gender pay gap, Agents of Change in diversity, and the "endangered species" that is the white, middle-aged man 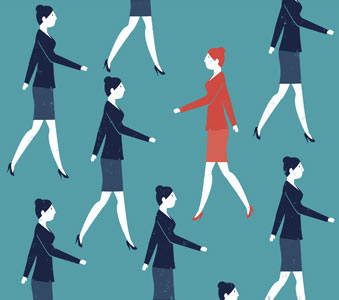 In the month when we had International Women's Day, I suppose it wasn't surprising that the news was dominated by female leadership headlines.

Let's start this month with the various people who are angry, or in trouble...

Emma Watson was on form, firing back at those holier-than-thou feminists who dared question her right to wear a risqué outfit; "feminism is NOT a stick with which to beat other women". If Emma Watson fought back pretty impressively, John Allan, the erstwhile Tesco chairman, didn't fare so well. He joked that white, middle-aged men were becoming an endangered species on company boards. You can joke about this stuff, but not if you are, in fact, a white, middle-aged man...

Angela Ahrendts, the former Burberry CEO and now senior Apple VP, got into a spat with Lucy Kellaway in the FT. The correspondence is worth reading. I come down squarely on the side of Ms Ahrendts. Being "present" in your children's life isn't defined by the quantity of time you spend somewhere vaguely in their vicinity. Shame on you Lucy Kellaway.

And finally, Muirfield came in from the cold and decided that accepting women members was a price worth paying to stay on the roster of courses able to host the Open. One more barrier fallen, about 7 million still to go...

Gender news in the City

It's another positive sign when UBS Wealth Management starts making direct appeals to women, which is what it did with its useful "Gender-Lens" Paper. The three keys to gender-equality are maternity provisions, domestic burden-sharing, and female career choices.

Schroders became the first FTSE company to release its gender pay gap data. Depressing or enlightening, depending on how you interpret it. Read my thoughts on the gender pay gap here.

The Fawcett Society released research showing that 29% of managers didn't think the pay gap was an issue. Is that a problem? Well, yes, but there are greater hurdles to overcome, and it's clear to see that the best employers are bending over backwards to treat talent equally, irrespective of gender. The bigger challenge is society convincing women that there are, literally, no jobs which involve brain rather than brawn that they cannot do at least as well as their male peers. And equally, accepting that there are no jobs a woman does that a man can't do.

Management Today released its list of the 30 men doing the most to promote gender equality. Delighted that my brother Ollie made the grade. Not before time! The emergency childcare and parental coaching we provide to many of the UK's leading employers has made a tangible difference to thousands and thousands of working parents.

If you want to really understand how big the issues are then have a look at this absolutely brilliant summary from the BBC. Combining a career with a commitment to one, or even both, of your ageing parents is very difficult without some employer support. Fixing our broken social care system will be one of the next generation's biggest challenges.

The Family and Childcare Trust's annual cost survey delivered the surprisingly good news that, for the first time in a decade, costs have generally remained stable.

Meanwhile, the end of childcare vouchers and the introduction of tax free childcare is edging ever nearer. Long-term, it might be very good for everyone and the thinking behind the changes is spot on. Short-term though, there is going to be some pain - either a lot or little depending on who you believe. Remind you of Brexit?

If you employ a lot of working parents and do nothing more than provide childcare vouchers, then you will need to re-think your employee proposition. Yes, we would love you to talk to us!