Once the Worst is Over: Single Parenting (Part 4)

Ben has a uniquely positive perspective on being a single parent. As the dust has started to settle, he looks back at how far he has come 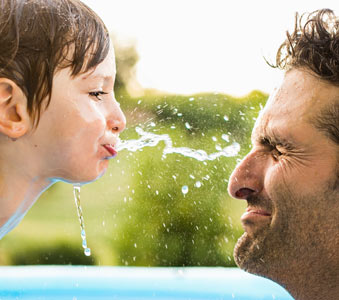 My Family Care asks Ben: Not all families are better together, but becoming a single parent is a huge commitment. Whether you take care of your children full time or make sure you spend as much time as possible with them, what have you found the challenges and rewards of single parenting to be?

I probably have a different perspective on single parenting than most people in my position. And I'm an eternal optimist - so read what follows with a pinch of salt.

Let's start with the process of getting there

It's painful and it's expensive. Typically you have to begin with a divorce, and that's no fun at all. Divorce wasn't something I had ever contemplated - I thought marriage was for life and it was a huge shock ending up as one of the statistics.

I struggled enormously with it. There's a bit of battered pride and an element of self-pity. But inflicting a load of pain and damage on your children, well, that is immensely difficult to get your head round.

I didn't have a good marriage. I hid myself in my business, in sport, and mostly in being a present and attentive father.

Telling my kids - the twins had just turned 7 and the youngest was 4 - that I was moving out of the family home was a truly awful experience. But here's the good news. Since that conversation over dinner and the next day's transition into rented accommodation, life has gotten better and better.

Surprising but true - here's my story...

First of all, I've been pretty lucky

Our marriage might have been difficult but we managed to make the divorce itself very amicable.

We kept everything civil, we didn't use lawyers, we kept the arguments to a minimum, and we emerged on the other side as good friends with a lot in common.

It meant there weren't any emotional arguments about access to the children.

We made an agreement

We agreed they should have one main base - which was obviously the family home - but I would have equal access rights. That means, and this is slightly bizarre, that I keep a key to my ex-wife's house.

I let myself in. Two nights a week I go round to feed them dinner and put them to bed. Two mornings a week I do the school run and, if the new boyfriend isn't there, my ex might even get a coffee. The ex and I have become genuinely good friends, it's weird how life goes!

No question, life has changed

I'm not sure what this says about me but, as a single dad, my life is incredibly selfish and I'm happy with that. Half my time is my own and no-one else's which means:

And when I'm not being an ego-centric pleasure seeker, I'm with the kids. I might see them slightly less than before but when I'm with them there is no place I would rather be!

Quality time with the kids

I get the kids every other weekend and the odd week here and there when my ex is travelling. They arrive Friday night and leave Monday morning. The weekends are magical. It's our time together.

I don't try and do anything by myself. It's simply about all of us having a party together. I'm taxi driver, cook, confidante and entertainer. Sure we have dinner in front of the TV, rarely eat vegetables and language isn't something I correct as often as I should. But, does that matter?

I'm a bit over zealous about cleaning teeth and doing homework (and the tennis, ballet and football!) but other than that, I'm almost new age.

And the good news doesn't stop there

Two of my brothers use my house as their London pad - which is mostly fun and only occasionally annoying. The kids see far more of their grandparents; albeit in an 'I use their home for holidays' kind of way.

And I've learned to cook. I might be poor, but I'm happy!

How are the kids with all of this?

They say divorce is emotionally traumatic for children, but some find it a lot less traumatic than others. And mine have found it the easiest of the lot.

There's a theory that today's children are far too cossetted. Everything is laid out on a plate for them, and suddenly when they have to stand on their own two feet, they are hit with a potentially fatal dose of reality.

So here's what I tell myself - my kids have already been immunised against some of the harsh truths of adulthood. It's a nice theory and one I'm sticking with.

Ben Black, Father of Three, and Director of My Family Care