After the heroics of the Lionesses in Canada and Heather Watson at Wimbledon, Ben has finally seen the light. But when will gender equality finally penetrate the world of elite sport? 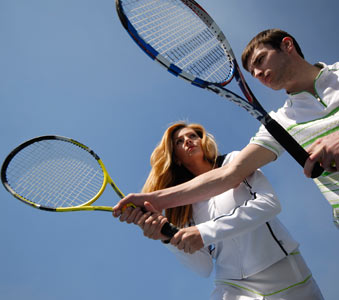 I'm a bit of a tennis historian

The most important and watched tennis match of all time wasn't the 2008 Wimbledon epic between Federer and Nadal, nor was it one of the 34 times that McEnroe and Connors did their stuff together. No, it was the infamous Battle of the Sexes in 1973 when Billie Jean King rammed Bobby Riggs' sexist ego firmly down his throat. In doing so, she struck the biggest blow for female equality since Boudicca was chasing the Romans all over the place at the head of the raucous Iceni mob.

A war of two battles

For those that haven't heard of the Battle of the Sexes, a bit of context will help. Bobby Riggs was an ex-player. He was a chain smoking, sharp witted, misogynist to the core. He thought female tennis players were rubbish. And as a winner of both the US Open and Wimbledon, it was a view that resonated.

The first Battle of the Sexes took place early in 1973 when a 55 year old Riggs defeated the great but unprepared and strangely nervous Australian Margaret Court. It was humiliating for Court and for the women's game. Billie Jean King - the other great player of the time - stepped into the breach and in a hugely hyped match, pummeled Riggs into submission over 3 straight sets.

Why was the match so important?

But, and it's a huge but I'm afraid... The women's game still basically sucks in comparison, doesn't it?

I mean the men hit the ball harder, the competition is fiercer, and the big four (Nadal, Federer, Murray and Djokovic) create far more interesting matches than anything the women's game can offer. They play longer matches, they don't stop playing when it gets too hot, and the game isn't dominated by robotic Eastern Europeans with unpronounceable names.

With those thoughts firmly embedded, I went off to Wimbledon to see Djokovic whup mouthy Australian Bernard Tomic, watch baby-Fed (otherwise known as Grigor Dimitrov) get out-wiled by the underachieving French magician Richard Gasquet, and then sit by as a pitiful Brit, Heather Watson, was steamrolled by Serena Williams.

How wrong I was!

Only it didn't quite work out like that. There was only one match that went down to the wire and kept the crowd baying and enchanted throughout. And yes, it was the Watson-Williams thriller that did it.

I still have a lot to learn. See you on the other side Bobby!