New Shared Parental Leave research has been released this week, and it's got Ben thinking about the future of shared leave, and why current take-up seems so low 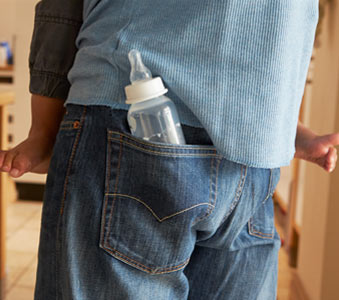 There are some new figures out from law firm EMW about the low take-up of Shared Parental Leave. Records from HMRC show that take-up is actually about 4% - in the range of the Govt.'s target of men taking it up, but still disappointing and low in the scheme of things.

Is the data accurate?

Probably, is our best guess. There have been the usual howls of protest from the people who introduced SPL. "Wildly misleading" was the Govt.'s official quote. The truth is, hard figures are difficult to come by, for the simple reason that employers aren't recording SPL with any degree of accuracy yet. Everything we know suggests take-up has been far slower than we originally hoped. But if estimates about the immediate take-up and effect hadn't been as bullish, then the legislation might never have got through...

Various reasons, some of which we can fix and some which we can't. The first one is obviously financial. If the mother gets an enhanced maternity package and the husband earns more, then the costs of taking up SPL can be significant. The only way to fix that is for all employers to equalise maternity/paternity pay, and for women to stop marrying men older than them (older men will typically have worked a few years more and therefore generally earn more as well).

Eventually, all employers will equalise maternity and paternity pay. Reducing the age gap between couples, well, that will take a little longer!

The second reason is knowledge. Not everyone knows about SPL yet. The idea of couples sharing parental leave is beautiful in its simplicity. But some of the details to work out behind the scenes are fiendishly complicated. Not every HR department has its head round the intricacies yet, and not every parent knows about it. We'll get there in the end, and articles like this help.

Then there is the career threat issue. Taking a break to provide some childcare, risks derailing your career. It's the challenge women have faced since they first dared to have careers! It might be completely wrong for a parental break to ruin your job prospects, but at least it's becoming a fairer playing field between the genders.

And finally, and most bizarrely, there is some negative feedback from the mothers out there. "We've fought for our rights and carried the baby... There is no way my partner is going to share any of my leave". You couldn't make it up.

Shared Parental Leave MUST have failed

Absolutely not. It was always going to take time. Getting the legislation through was a massive achievement. And even a few fathers successfully taking it up is a success. What happens next is the important bit.

From here on it's all good news. There are already a few enlightened employers out there - people like Deloitte and Shell. Gradually more and more will realise that SPL is a golden opportunity to genuinely create a culture where the best talent gets to the top, irrespective of gender.

More and more fathers will start understanding the benefits - that it really is possible to be a better father and keep your career on track. Those first few trailblazers will go back to their jobs and a good proportion of them will be happy and successful. Other dads will take note. It might take a few more years but, in time, taking up SPL will be as normal as having women leaders running 3 out of the world's 5 biggest economies!