After our findings on Shared Parental Leave were published, Ben looks at the statistics we found, and what the future of SPL could hold 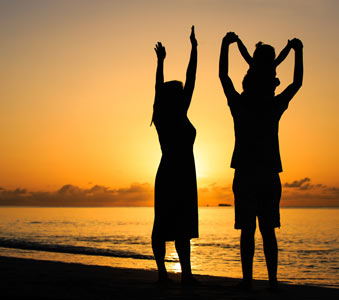 The positive and the negative

What's been interesting to me is the reaction to the report

We highlighted a few things that were positive - because we are very much in favour of equality in raising children - and some that were negative. Lots of people have been talking about it, and that to me is the golden ticket - how often is SPL on everyone's agenda? A few sources have questioned our stats, which is to be expected when the policy is in its infancy and where the data available is still relatively small.

Shared Parental Leave should be obvious - but for some reason it's still not getting the awareness it deserves. Only 40% of people surveyed felt their employers encouraged SPL, and 50% of men and 57% of women still feel that taking leave will have a negative effect on a man's career. How antiquated is that? Women have been fighting this stigma for years, so why should men think their careers are more important?

Coming into the 21st century

My father didn't stay home with us, my mother was expected to... times have changed. The fact that Shared Parental Leave offers choice is a step in the right direction. Now that the policies - while not perfect - are in place, we need to get everyone onto the same page and into the 21st century. Taking leave shouldn't hinder anyone's career, male or female. While having children does make your career more complicated - at least it's the same size challenge for men and women.

In the report, we highlighted that the 1% take up reported by employers, referred to all men, not just eligible men, within the companies

This figure has been reported as 1% of men in some places and 1% of fathers in others. Whether it was unclear or people mistook men for fathers, it has brought up what we think is a very interesting debate.

Finding the true number of eligible men is not simple maths - some have suggested simple arithmetic such as birth rates and employment numbers in the UK will do the trick. However, it's a lot more complicated than that - it's an algorithm that needs to include adoption, same sex couples where both parents are the same gender, and the number of working males whose partners satisfy the partner requirements for SPL. In a utopia finding the number would be easy, however - real life situations are not always ideal.

I think the thing that got me the most about the statistics is that 63% of men are considering taking SPL when they have children, or wishing the policy had been in effect when they had them (I know I would have loved to spend more time with mine) - there is light at the end of the tunnel.

The future of sharing leave

What needs to be addressed is that while 55% of women don't want to share their leave entitlement with their partners, 64% think their partners should be able to take more leave. Basically, they want it all - but why shouldn't both parents have access to time with their new addition without having to fight for it? Shouldn't both parents have access in that first year, without someone else having to give it up?

I've always pondered whether the two should be connected. Take Sweden for example where parents are entitled to share 16 months leave, but 2 months of that has to be taken by the father and another 2 by the mother - the rest can be shared.

All in all we're all talking about a subject that needs more awareness and more ambassadors. Having role models at senior levels will help and hopefully over time the stigma will fade.