My Family Care is delighted by the success of two of our clients, Barclays and Danone, in this year's awards 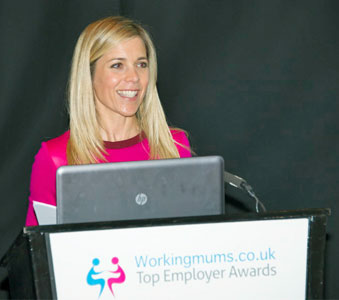 This month Workingmums.co.uk has announced the winners of its fourth annual Top Employer Awards, celebrating the leading companies in family friendly working.

Winner of the Overall Top Employer award was Atkins

Atkins was praised by judges for the range of initiatives it was undertaking on flexible working and women's career progression in a tough economic environment and a male-dominated sector.

Awards were presented for eight other categories, including a new category on Career Progression, introduced to reflect moves to increase the female pipeline as a result of targets for women on boards.

Talent Attraction Award - Barclays
The judges felt the winner's outreach work was very strong and praised the fact that they sponsored awards and projects that promoted or supported women in the workplace. They built relationships with prospective employees at an early stage and openly advertised flexible jobs.

Family Support Award - Danone
The judges felt the winner of this award had a comprehensive approach to family support, covering adoption policy, flexible working for all, family days, retirement policy, grandparent leave, surrogacy leave and stress and well being.

Innovation in Flexible Working Award - Atkins
The judges praised strong case studies, a high level of flexible working among men, female leadership targets and a clear drive and strong business case for diversity in a sector where this was not the norm.

Career Progression Award - Royal Mail Group
The judges felt the winner made a strong and public case for its programme to improve the female talent pipeline. It had good representation of women in senior roles, there was work on career progression at all levels and a new leadership programme and workshops which gave women the tools they needed to succeed. The organisation was also praised for its outreach work in schools and universities.

Best for Dads Award - London School of Economics and Political Science
The judges felt the winner had built on its innovative programme for dads and were impressed that some 37% of male employees were working flexibly in an environment which was often inflexible and that workshops for dads were offered to partners of staff who worked in other organisations.

SME Award [up to 25 employees] - Mahon Digital Marketing Ltd
The judges praised the winner for its impressive remote working model and the fact that it worked on an international scale. They made a good business case for hiring parents. The organisation showed that it didn't matter where people were based in a successful flexible business model.

SME Award [26 to 250 employees] - Brand Learning
The judges praised the winner's commitment to diversity at board level, its family events, employee assistance programme and coaching and counselling provision. Its directors were walking the talk in a sector which was highly competitive and where there is a long hours culture.

Working Mums Champion Award - Clare Bishop of Addison Lee
The judges felt the winner stood out for her commitment to driving through an innovative programme which got people talking about the issues facing working mums in the workplace. Her influence went beyond her own company and she had caught the public imagination.

Judged by an expert panel

The Award judges were:

The judges took part in a lively Q&A Panel, which was sponsored by William Hill. There was also a networking session where winners and shortlisted entrants were able to swap ideas. Media partners for the event were The FIRM and Anywhere Working.

"Entries for this year's Awards were very impressive and the judging process was often very close as a result. We were particularly struck this year by the range of different employers doing innovative work in their sector and clearly grasping the business case for doing so. We hope the Awards will inspire other employers to follow their lead."