In this month's summary, Ben Black takes a look at the gender pay gap, how Grandparental Leave has made some headway, and the negative comments surrounding International Women's Day 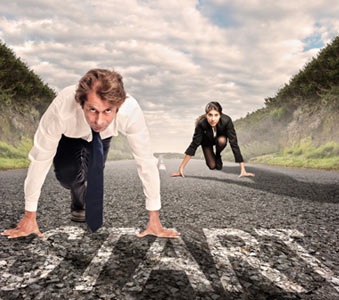 March seemed to be all about female leadership so let's start with some childcare news instead...

Childcare and being a working mother

Interesting stuff out from the Overseas Development Institute about how much of the childcare men do in different parts of the world and what is referred to as the 'global childcare crisis'. The UK doesn't do too badly - a lot better than Mexico, which is possibly the worst country in which to be a working mother.

Closer to home, PACEY - the body which represents the UK's 50,000 childminders - produced findings to illustrate the link between childcare and the challenges of being a working mother. There was nothing new in the findings, but great to see PACEY actually making some noise. Childminders could be the answer to the UK's search for affordable quality childcare. All they've lacked is a decent body to represent them; maybe things are about to change?

Strangely, this year there seemed to be as much negative comment as positive reported from around the world on International Women's Day. "As artificial as Mother's Day without the personal touch" said Ann Marie Hourihane in The Times.

Here in London we found out that only 13% of those lovely blue plaques represent women - luckily the BBC reported a plan afoot to fix it.

The gender pay gap was in the news again. Nicky Morgan tends to be the Govt. spokesperson on the gender pay gap. Embarrassing, therefore, when it was revealed that her own Department of Education has the same gender pay gap issues as everyone else; apart from Amazon, that is, which found - to the amazement of all - that it had no gender pay gap issue at all! Nearly all intelligent comment says that there is no good reason for a gap.

Research from Tromso University did find, however, that men are indeed better at assembling IKEA furniture! That was the headline at least. Dig a little deeper and it transpired that there was no difference if instructions were provided and followed...

Jayne-Anne Gadhia, the Virgin Money boss, finally reported back on the Govt. sponsored Commission she has been leading. She called for 50:50 gender splits in the banking industry by 2020, but stopped short of recommending quotas, with both Lloyds and Barclays signing up to her recommendations.

The legal industry fares no better than banking when it comes to female leadership. There are lots of reasons why which were neatly summarised in research from FIDES Search (where our very own Beccy Ford-Johnson was widely quoted).

Maybe women just need to make more use of their social capital to reach the top? That was the suggestion at least from Ruth Sealy, who made her name at Cranfield and is now doing great things at City University.

I always think that Grant Thornton's annual "Women in Business" report is the best and most accurate picture of how women are really doing globally. The results are mixed to say the least - over the last 5 years the number of women in senior leadership roles has gone from 21% to 24%. Slightly bizarrely, it seems, we all have a lot to learn from Russia!

Parental Leave - outside the box

Finally, and for something a bit different, Santander became the first employer to extend shared parental leave to employees who become grandparents. And, I kid you not, Israeli men may soon be able to participate in a breastfeeding hour off from work.