Where's the Next Sheryl Sandberg?

With some amazing role models, Ben asks: why are women still a marginal force in the workplace, and how do we change this? 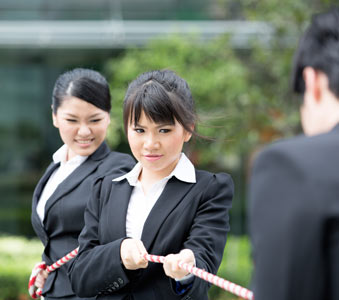 I met Viv Dykstra recently, the inspirational founder of the Artemis Network. Her proposition is simple: too many girls in their early to mid-teens deselect themselves from a career in construction, engineering, and tech.

As a leading global employer (think Google or Facebook) you cannot go to universities and recruit female talent because... it's not there!

To get more women to the top in those industries you need to get girls thinking about being the next Sheryl Sandberg in the fun and formative teen years (that's a joke about Sandberg by the way, but you get the point).

Best woman for the job

I wish it was that simple. I had a brief stint as a lawyer at one of the big City firms. Fair to say, I didn't cover myself in glory. But one of my abiding memories was that women just seemed better at this legal stuff.

There are actually 3 founders of MFC, two of us are lawyers. Amanda Coxen was a friend from Law School who sat in the front row and won all kinds of prizes. Suffice to say I sat nearer the back and didn't. Maybe my views have been moulded by those slightly humbling Law School exit results?

Putting the men to shame

I was part of an intake of 30 trainees. The women worked harder, understood more and shone until they became senior associates - and then left to have babies. The men who did stick around, like proverbial cuckoos, then neatly slotted into the women's shoes as the junior partners.

My point is this: when it comes to law, girls aren't deselecting themselves. There are more women going into law than men - bright, talented, ambitious women who often put their male peers to shame. And yet a glass ceiling still exists.

Sure it's getting better and firms such as Freshfields, and Baker & McKenzie are doing some impressive and genuinely culture shifting things to improve the gender diversity of their leadership.

But men still make it to the top far more easily than women.

Why? Well you'll have to wait for next week's blog to find out. Of course if this was Amanda's blog she would have written 800 words now and you wouldn't have to wait.

That subtle difference in approach is also the reason her golf is a lot worse than mine!