Dr. Jana Javornik Skrbinsek believes it's high time UK parents were given the opportunity to divide parental leave in order to share precious time with their young children 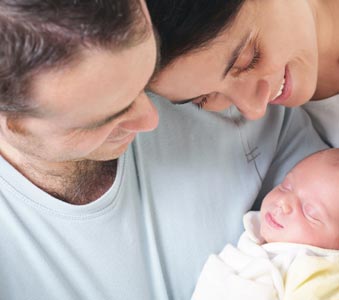 My Family Care asks Jana: With the introduction of Shared Parental Leave, there is much debate about whether men will in fact take up the offering or whether it will make a difference to women in the workplace. What effect do you think the change will have? In an ideal world, what needs to happen to change the face of parental leave?

There's a Café on the high street in Umeå (north of Sweden), where I used to take refuge on Saturday mornings. On one such morning, I counted 16 dads and babies - other days I had seen more. Men with prams or baby carriers walking or cycling the streets in the middle of the day is considered 'normal' in Sweden.

I miss such views here, and think it is high time for parents in the UK to be given the opportunity to divide parental leave, allowing both Mothers and Fathers to spend quality time with their small children.

Childcare should be a shared responsibility

Having lived in countries with the most generous parental leave schemes in the world, Sweden, Slovenia, Denmark and Iceland, I grew up believing that both parents are responsible for childcare. In the UK, however, legislation, workplace culture and practices are largely geared towards women providing childcare.

Here, having a child seems to force inequality. Childcare and child-related leave is not affordable. Women's jobs and careers seem secondary to men's, while men are neither encouraged nor supported to be full-time dads; although more men chip in, on average they still do far less than a fair share of housework and childcare.

Prevailingly, they are a backup parent or temporary assistant during their two weeks' paternity leave. Such gendered parenting limits female employment opportunities, prospects for gaining (adequate) income during a woman's working life and into retirement, and our possibilities to compete with men for the best paying jobs. And, it constrains men's parenting opportunities.

Cultural changes are slow to achieve

Shared Parental Leave is the right step towards a fairer division of work. The new scheme will significantly improve access to leave and pay for adoptive and same-sex parents. However, the new policy is likely to fail in its aim to foster gender equality and promote a new parenthood ideal.

Bluntly, the proposal fails to integrate research findings. It does not effectively challenge gender roles; its incentives are simply too modest. The balance of policy instruments is weak, and the fine-tuning with other key childcare related policies is missing. Indeed, it seems like the UK was the first country ever to introduce parental leave, not learning much from the rich experience in 'Europe'.

Men are highly sensitive to income support payments: the higher the payment, the higher the chances a father will take it. Thus, the unpaid weeks are likely to continue to be used by women who, on average, earn less than men.

On average, the household income shock is lower if women take time off from work. New fathers taking leave will continue to be an option on which to fall back instead of being the first choice, especially when affordable childcare services are limited.

2. Women choose whether they share leave with a partner

Organising parental leave as a joint right diminishes the chances of dividing it; it is likely that many will see it as a mother's loss, of which the Slovenian experience is informative.

With one of the most generous parental leave schemes, Slovenia has been at the forefront of efforts to support female employment since the 1970s. Both parents are entitled to 260 fully paid days of parental leave (plus 105 days of paid maternity and 90 days of paternity leave, of which only 15 are fully paid).

The right is organised on a transferable basis, whereby parents make a joint decision about who will use it. Although parental leave has been opened to both parents since 1976, mothers continue to use their entitlement to the full, with around 5% of fathers taking-up this right. Fathers' entitlement is thus weakened by their claim being conditional upon the written consent of the child's mother.

The recent proposal to install a one-month 'daddy-quota', which would affect mothers' entitlement, faced strong opposition from both employers and parents; heated discussions opened up between those advocating individualised rights and those arguing that any such decision should be made in the family.

These left the Slovenian government with little room to manoeuvre and instead, paid paternity leave was extended from 15 to 30 days, leaving parental leave untouched.

For the policy to spawn a more fundamental change in parental roles, the entitlement should be granted as an individual right. Alternatively, a forceful 'use it or lose it' quota or a gender-equality bonus for families that share leave more equally could be considered; Iceland and Sweden provide a good example.

And single parents? They could benefit too, for example by opening leave to grandparents, as in Hungary:

In the Icelandic 3-3-3 Leave Model, each parent is entitled to a 3-month paid leave, and a joint decision is made between parents for the last three months.

All biological and adoptive fathers have individual non-transferable rights to three months paid leave, regardless of their sexual orientation or marital status. Single parents (only when the other parent died or a lone parent adopts) have the right to nine months.

Hungary differentiates between parental leave and pay for insured and non-insured parents. The right to the latter (known as GYES) is extended also to grandparents and is funded from general taxation. These can take it from the child's first to their third birthday if they look after them and the parents agree to transfer their entitlement.

3. Flexibile working in use is another critical element

When available in a form of reduced working hours, weekly or daily part-time, the leave will positively affect both mothers' employment and fathers' take-up: mothers with lower income will not have to stop working (as they do when childcare costs are high), and mothers in higher occupations as well as fathers in general will be able to better manage their employment and childcare responsibilities.

However, new rules are complicated and hence they are likely to be unpopular with employers. Here, I would urge a best-practice exchange with Sweden, the country with the most flexible leave. Men may be reluctant to participate in this policy programme because they fear their jobs/careers would suffer.

The prevailing organisational practices not supportive of men's active parenting may make them reluctant to claim those benefits, especially when the amount of time spent at work is interpreted as an indication of employees' career dedication. The corporate culture could thwart the development and effectiveness of this programme; hence it is important to make a convincing case for the business at this early point.

Sweden provides a 'Gender Equality Bonus' (jämställdhetsbonus). This is an economic incentive for families to sharing parental leave more equally between the mother and the father. Both parents receive £5 each per day for every day they use the leave equally (a max of £1,230).

Sweden has promoted active fatherhood since 1974, and shared parenting has increased in result; considerably more men than in other countries use longer parental leave, and the problems associated with fathers' taking leave have decreased.

Fathers are granted well-paid daddy leave of 16 weeks: because they take over childcare, mothers on average resume employment 4 weeks earlier; each additional week of 'daddy days' increases job retention of women for about 4%. No such effect was found in Denmark, where fathers were entitled to shorter leave with lower financial compensation.

Length of leave is counted in days to enhance flexibility of use, and paid and unpaid leave can be combined. Paid leave can be taken at any time until a child's eighth birthday, either full-time, half-time, quarter-time or one-eighth time, with the length of leave extended accordingly (e.g. one day of full-time leave becomes two days of half-time leave and four days of quarter-time leave). Parents can take leave in one continuous period or as several blocks.

An employee taking parental leave has the right to be off from work for a maximum of three periods each year, but many employers allow for more. Two parents can take up to 30 days of leave at the same time, until the child reaches one year of age; these days are known as 'double days' (dubbeldagar).

The future of Shared Parental Leave

In the long run, available policy and the public debate will affect parents' expectations and their sense of entitlement to legal rights, and we already see it shaping the public opinion.

Shared Parental Leave delivered as a statutory entitlement will create new opportunities for both women and men to make claims at the workplace level; it will encourage employers to understand that women can work and have careers even with children, and that men are fathers, too. This might change the hiring practices, and women might stop being treated as secondary workers.

But for policy to be successful, the government should ensure and monitor that leave does not come with penalties for parents, including job loss or discriminatory treatment in pay and promotion.