True role models are people just like us, believes Tammy Parlour. She says we need to see people like ourselves achieving to realise that we can do it too 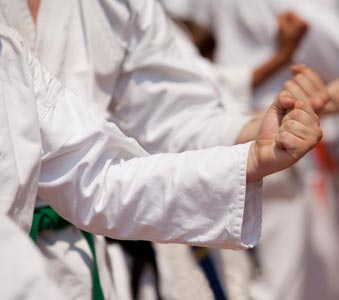 My Family Care asks Tammy: We are surrounded by people that are deemed role models. What makes a role model, who have been your role models, and who would you hope your children see as a role model?

Being a role model comes with responsibility

As a martial arts master, I recognise that I'm a role model to my students. Being a role model is a by-product of my position and not something I take lightly. Learning to be comfortable with that responsibility has driven me to question my own beliefs, motivation, insecurities, and fallibilities. My position of responsibility drives me to learn and improve, and pushes me to be the best teacher I can be.

When thinking about what it means to be a role model I notice that, for the most part, people don't attempt to achieve something unless it's already been done. First they need to know that something is possible, and then they need to believe that it's possible for them. Role models provide real evidence that you can land a particular job, take up a sport that you love or become a leader in your field. They are proof that, even if it is hard, it isn't impossible to become the person you aspire to be.

A point of comparison

When we see people like us achieving we think about our own potential. Role models possess the qualities or behaviours that we want to have ourselves.

A good role model might teach us how to make healthy choices, the value of respecting others, or about the determination needed to achieve goals. Somehow they enable us to say, "I could do that". They are people who challenge us to be the best version of ourselves, and show us that our aspirations can be real and achievable.

This is the power of role models, and this is why we need to ensure our children are always able to access a range of positive influences that they can relate to and be inspired by.

Before the London Olympics, most of the people I'd had access to and therefore moulded myself on within a sporting environment had been male. But London 2012 brought with it an abundance of media interest in female athletes. Women in sport were visible. And I suddenly realised how absent they had been in the media and public consciousness.

The achievements of female Olympians like Jess Ennis and Nicola Adams were extraordinary. Like many women, I was inspired. For me though, it wasn't the individual performances that moved me. I felt inspired seeing a composite of elite female athletes from a range of sports, at the top of their game, being noticed. Seeing so many other female athletes told me something that had never occurred to me before. It told me that it was okay to be seen.

Since London 2012 I've learned about the reality of women's sport, the poor level of media coverage, and the shortfall in commercial investment. The statistics are shocking; and the Women's Sport Trust, a new grant giving charity, is working to help ensure that there will be an Olympic legacy for women's sport that means we can continue to see more of these wonderful role models. And so can our children.

Sport is one of the most public platforms we have. Increasing the visibility of a diverse range of sporting role models is a about sending a positive message to women and girls about what is possible. It is about creating positive change for women. It's about ensuring that women and girls are seen, that they see themselves, and that they have every opportunity to reach their potential.

Tammy is a Hapkido master with over 30 years experience. She runs a martial arts school in London, and in 2013 co-founded the Women's Sport Trust.