Is knowing and understanding the value of money a necessary skill for children? Ben's not sure, and he's given up on trying to interest the kids with cautionary tales of capitalism and communism 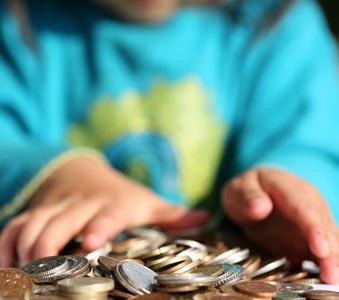 Newspapers. Do you still read one and if so, do you start at the back or the front? Depressingly, I think these days I start at the front more often than the back. I'm getting older, grumpier and more opinionated, and not sure who to blame.

Does capitalism work? That's my current obsession. There's one theory that the reason capitalism has gone so mental is directly linked to the collapse of communism.

Back in the 1980s, capitalists were desperate to prove that their system was better and nicer than the evil Soviet block. Without that moral check, you end up with the likes of Madoff, Enron et al. It's a nice theory, and one I've been sharing with my children.

Surprisingly, they don't seem to get it. I mean the 8 year olds listen politely, but the 5 year old basically ignores me. The value of money is an important life lesson for our cosseted little darlings.

I've been going about it all quite traditionally - give them some minimal pocket money, make them buy their own sweets and toys, and they'll turn into great entrepreneurs... I sound like Mr Banks in Mary Poppins.

Like most of my firmly held beliefs, it's been shattered into little pieces. I'm divorced, poor and happy these days. Do I really want to deny myself the pleasure of buying sweets and toys?

Is understanding the value of money really an essential skill for children? Truth be told, I'd much prefer they knew about James Lovelock than George Soros.

The most successful country of the last 30 years has been China, and that's where we're going in my household. Pocket money is being returned to the mothership. Democracy is out and rice is in. Rise early, work hard, be happy. They'll thank me in the end!