Hillary Clinton, a Lesson in Work Life Balance, and Where Are the Feminists?

During a 'detour' on his way to France for a family holiday, Ben pondered the lack of excitement surrounding Hillary Clinton, and asked himself why the French just seem so melancholy 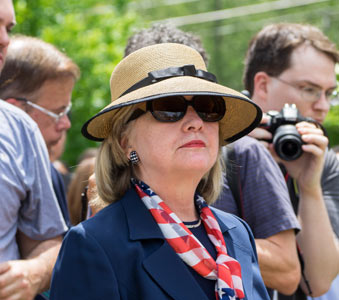 I went to Toulouse with my kids for the May Bank holiday. I say Toulouse, but thanks to various strikes raging across France, it was actually Barcelona we went to.

BA kindly gave me 10 hours notice that all flights to the land of garlic and cheese had been cancelled, so there was a bit of stress finding a solution. I ended up landing at 2am and - thanks to that amazing thing called the internet - managed to find a slightly dodgy student to drive me and the gang in his clapped out SEAT, the 4.5 hours to our destination. Where there's a will, there's a way!

And of course it was worth it. It was a magical weekend and arriving was way better than the miserable journey to get there.

And the primary goes to...

A four hour drive in a noisy diesel with 3 snoring kids gives you a bit of thinking time. I started off with Hillary. Weird, I know.

So a woman, yes a WOMAN, has just secured the democratic nomination to be the most powerful woman in the world. Unbelievable. Break open the champagne, get the tinsel out and put on your dancing shoes. Wow!

Apart from that fact that you wouldn't know it from the muted reaction. Why is there no feminist outpouring of euphoria? Have those hard-nosed feminists been travelling so long and become so disillusioned they've forgotten how to celebrate? Or maybe the Women's Equality Party is having a secret party and I'm just not invited... hmm.

Work-life balance, not for everyone

Luckily I didn't stay on Hillary too long. My wandering mind turned to France.

When it comes to the French, and as my journey proved, they have already arrived at something close to work-life nirvana. They have great food, lots of wine, a nice big country with a fantastic health service, plenty of sunshine and they do very little work. Seriously. There seem to be about 3.5 people keeping the whole country going. Look at the new employment laws, they are all shrieking about in comparison to the Anglo ones we take as normal, and it's almost amusing.

But are the French happy? No. They tend to be a miserable bunch of existential, navel gazing depressives. There's a lesson in there somewhere...