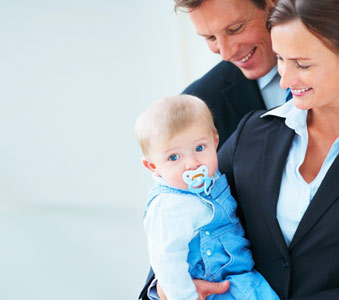 The Shared Parental Leave proposals are designed to cater for a growing desire by men to play a more hands-on role in a baby's first months.

Deputy Prime Minister Nick Clegg said the rights would allow men to become more hands-on fathers and put an end to women feeling they have to choose between a career and a baby.

A fully flexible system of parental leave will be introduced in England, Scotland and Wales which will allow new mothers to trigger flexible leave at any point after the first two weeks' of giving birth. Mothers and fathers (or of course same sex partners) will then be able to share the remaining 50 weeks between them by taking the leave in turns, in different blocks, or at the same time.

In an effort to allay fears over the impact on smaller firms, bosses will have to agree any proposed pattern of time off and will retain the right to insist it be confined to a continuous block, with no more than two subsequent changes.

New parents will be entitled to return to the same job only if they take off six months or less. Parents taking more than six months off may return to a role that is similar but not identical.

But is shared parental leave anything new?

Since April 2011, fathers and mothers have been able to share some of the 52 weeks' existing leave, with the father able to take up to six months beginning after the baby is 20 weeks old. But this can only be taken as a single block as can the leave the mother takes. The new system introduces the option of much more flexibility, though this will depend on an employer agreeing to the proposed pattern of time off.

Separate new reforms will also extend the existing right to request flexible working beyond parents and carers to all employees in an attempt to reflect the increased role of grandparents, wider carers and the changing demands of the workforce generally.

The Institute of Directors business group said the plan was a "nightmare" that would "heap yet more burdens on struggling employers".

Deputy Director of policy Alexander Ehmann said: "The proposed system is considerably more complex and unwieldy than the current laws and employers will - once again - have to absorb the cost of adapting and implementing this new system".

The CBI welcomed the news. Neil Carberry, director of employment and skills, said: "We are pleased that the Government has listened to firms' concerns about being able to plan effectively around parental leave".

What is My Family Care's view?

We welcome the increasing recognition of the role of fathers in child-rearing and the scope that exists for shared care to enable women too to keep their careers on track. As we've often commented, it is about equality of opportunity at work and at home, being closely tied together.

At our most recent Think Tank event for leading employers, it was clear that the organisations leading the way on the family-friendly agenda see Shared Parental Leave as an opportunity to take an enabling approach to parents wanting to integrate work and family. In the competition to attract and retain high calibre talent, employers are continually looking for fresh ways to demonstrate a commitment to making life work for their people who are called upon to deliver in demanding roles.

Any issue is mainly around arranging cover for leave taken in shorter blocks, but that can be viewed against a backdrop in which some roles are currently redistributed among existing team members (as in may law firms) rather than covered by a temporary hire, so shorter blocks of leave would be less of a problem.

The new regulations position the other partner's leave much more squarely within the period in which pay for time off is enhanced by many employers, compared to the rigid system of Additional Paternity Leave which is little used due to the pay loss it represents.