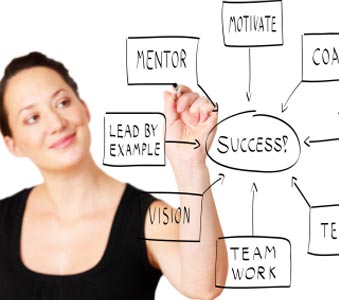 My Family Care asks Jennifer: Employers sometimes talk about 'supporting' women through maternity leave, yet we know that it's also a time in which great personal development takes place. Are there things you think you do better since becoming a parent? And what support is needed to successfully return to work?

When we provide maternity coaching in groups or one-to-one, and when we help clients design coaching strategies, we talk about viewing this period as a development, not a deficit.

Yes, support is helpful through any major life transition, but the support new parents seek includes being involved in proactive planning; having mentors or sponsors; gaining tips and hints; space, structure and encouragement to draw out their own aspirations, resources and solutions. They value ways of engaging stakeholders, keeping in touch with their career and role while out of the workplace and perhaps a staged return with some flexibility.

By contrast, sometimes 'support' is misinterpreted to the extent that a returning mother feels side-lined by a manager's well-meaning attempts to let her 'take it easy' or to remove her from demanding projects; just at the moment when she is feeling she is under the spotlight to re-prove her commitment.

What Chapman reported was no surprise to our programme leaders but it was remarkable enough to form the basis of our joint paper at the Equal Opportunities International Conference 2008 and a research news article in Coaching at Work magazine: Keeping Mum in the Workplace.

According to Margaret Chapman, the women reported a dip in confidence at work and yet spoke about motherhood as empowering, and it depended on which questions you asked. "It was striking how the women had acquired a whole set of skills and capabilities that were seemingly out of their awareness yet revealed distinctly new talents critical to successful leadership ... These findings suggest that motherhood ... holds great potential and is an example of accelerated learning."

In simple terms, if you start a conversation about challenges and loss of confidence during maternity leave and return, that's what you'll find. If you draw on positive psychology approaches - such as identifying strengths and success - you are in a much better position to recognise you have the capability for a strategic, business-focused conversation about, say, flexible working.

A large component of the programme Margaret observed - which went on to help the client win the Opportunity Now award for Innovation and still runs today - was to enable women to form networks and have open conversations.

It's very healthy to confide worries and doubts in a like-minded group; and then it's great to draw out and share solutions. Participants use coaching frameworks and case studies to map out strategies for managing their preparations, leave and return influentially. They often recognise they are better - post-return - at time management, prioritising, negotiating, and rising above some of the pettier aspects of office politics.

Not everyone accepts these improvements. Anna Tims interviewed me for a lovely piece in The Guardian 23 Oct 2010, in which this idea cropped up. A reader comment by "Oomph" counters: "Erm, nope sorry. No idea why mothers like to drag themselves down by believing this holds weight... This is like expecting "can tie shoelaces" to impress. I'm an accountant but I don't expect to get a job because I run a home budget and know how much interest my savings get. What's more, suggesting that interacting with one's own family is in any way like having to deal with a random and diverse set of independent adults just shows a staggering lack of insight and grasp on reality..."

Nicely put, yet it's about more than tying shoelaces and sorting out who does the washing up; more even than dealing with the surprising random and diverse friends a teenager might bring home.

There is a shift in how one views oneself, and one's place in the world, on becoming a parent; just as there is at other key stages in life, such as when our own parents die. To miss the developmental aspects of these transitions is to neglect the real sources of motivation and capability that employees bring to work.

Being a role model

On a personal level, I have grown in ways I consider transformational in the 12 years I have been a mother, and I refer to much more than the persistently curvy belly and hips!

Granted, these years from 30's to 40's are a period in a woman's (or man's) life when we would naturally expect to grow. But for me a telling moment was that at the age of 39, when I began thinking about legacy and lasting impact in the world - as 40 loomed - I became intensely aware of my wish to be a role model to our two sons. I wanted almost more than anything to be able to talk with them later on about my part in creating powerful, positive change out in the world while also being a mum who is human enough, and present enough, to help them become all that they can be; part of a new generation of leaders in a fast-changing world.

So that's what's better, for me, since becoming a parent: it calls me to account, and to walk the talk in my work and life, more urgently than any other drivers I can think of. Jennifer Liston-Smith, Director, Head of Coaching & Consultancy, My Family Care