Talk, Talk, and Talk Some More: Coexisting with a Teenager (Part 5)

Living through the teenage years doesn't need to be a constant battle, says mum Kirsty and teen daughter Maya. But they agree that laying some heavy groundwork is the way to survive 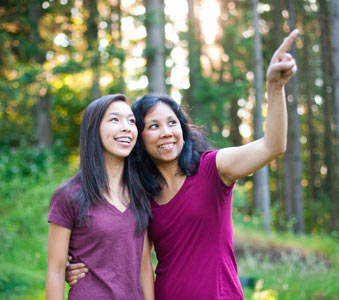 My Family Care asks Kirsty and Maya: Being a teenager can often make it hard to see eye to eye with your parents, whilst parents living with teens can often feel like they're failing to make a proper connection. What advice do you have for parents/teens on how to avoid major conflicts, set realistic boundaries and make home life easier?

My eldest child is fourteen years of age. She was my first baby, and she taught me how to be a mother. I'm still learning. I consider us to have a good relationship; we eat together, we choose clothes together, she shares songs with me, and, most importantly, we laugh together. She makes me laugh and she also laughs at my stupidity and rubbish jokes or accents.

Laughing is a large part of our relationship, but she is also aware that I can be very strict and can also get angry. She knows what I expect from her and she knows what to expect from me as her mother.

Give and take is the basis of our relationship.

There have been raised voices

When she was growing I had quite strict rules on respecting others, behaviour inside/outside of the home, and the seriousness of supporting one another within the family circle. As a result, she has been a general pleasure to raise.

Being a normal child; she has been in trouble here and there, had fights with her (younger) brother at times, and has pretended to be asleep when in fact she is sending messages to her friend! I have shouted at her for all of these things, but have learned recently that shouting no longer engages her.

I shouted when she was five years, seven years, eleven years, and these were all times when shouting was the only option to get attention from children playing ball games in the living room! When you have a sleep-over with five 11-year-olds and the children are still awake at 3am, the only option you have is to shout. It gets their attention every time and brings instant results. Then she started her period. She was becoming a woman.

When a woman shouts at another woman it only creates angst, and even touches on hatred for that person who has just shouted at you. I now speak to her - she is three inches taller than me so it feels a bit silly to shout!

I am lucky in that she is generally a good girl. My friends have all told me that she is a great teenager. She's respectful, does her homework without being asked, does well at school, has a love of sports, collects her younger brother from his friend's houses, and is a general help.

She also has a very nice nature and can always be trusted. When she says she'll do something, she does it and will not let you down. She keeps secrets people tell her. She's mature and appreciates the bond that we have as a family.

I hope she continues to grow in the way that she is growing. As I mentioned, I'm still learning. She's my eldest, and so this is my practice run!

Girls are from Venus

When it comes to parenting a teenager, it depends on who the parent is, and their natural parenting style. It also depends upon whether the parent and teen have a strong bond, forged when the child was younger.

But the gender of the teen is also important and how they cope mentally, physically, and emotionally. My brother would usually prefer to receive praise from all the good things he's done, whereas my friends and I prefer advice on struggles in life or where we have gone wrong.

Listen and be heard

In order to keep a healthy relationship on both sides, most teens would prefer to talk about a problem. This is because, when a parent and child talk about things - why things have gone wrong, and the action needed to be taken to set things right again - a teenager understands why they have been punished or given consequences. This also builds a stronger bond between parent and teen. The relationship is less tense and the teen opens up more.

The teen feels as though the parent comprehends and they feel closer.

Although most girls react well to consequences and abide by them, the boys I know do the opposite in order to prove a point or gain further attention. Boys tend to feel uplifted and happier when receiving praise for all the little things, whereas girls process the big praises and remember them.

To conclude, when raising a teen, the best action to take is to ensure you have a close bond and a strong, healthy relationship built upon talking.