Slipping into the Carer's Role: Am I a Carer? (Part 1)

Kate O'Loughlin had been helping her Mum for so long as part of a routine that she didn't realise she had become a carer. She discusses the importance of finding a support network when you find yourself in the role 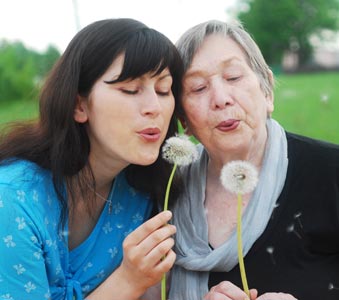 My Family Care asks Kate: We hear more and more about the Sandwich generation, and how people are caring for both their children and their parents. But one of the things we fail to grasp is when we become carers ourselves. What is a carer? What advice do you have for someone who discovers they have gone from dependent to carer? And what support is available for carers?

Understanding what a carer is

It was quite a shock for me when I realised that I had become my mum's carer. It sort of crept up on me. I remember sitting in the Doctors surgery with her and reading a poster that invited carers to register to join a carers network. It asked some pretty obvious questions, such as:

I found myself idly answering these questions while we were waiting, and it dawned on me that I had slipped into this role with no support and had not even realised I was doing it.

It's difficult to adjust

I was not the sort of person who considered myself a carer; I was a successful executive holding down a senior role, and didn't want to see myself in this way. We had moved in with Mum because our house was undergoing extensive repairs. I didn't want to take on this role, and I certainly didn't want to sit around with a bunch of other people who spent their whole lives looking after other people; so I strapped on the backbone and knuckled down.

Mum has Alzheimers and she deteriorated slowly. When I was a little girl, she would cook and I would help, but as the years progressed, our roles reversed and she was the one asking me what to do.

It was several years later when I asked her to slice the carrots as she had for every night since I could remember, and she asked me how I wanted it done, that I realised she didn't really understand. So I gently picked up the knife and showed her what to do.

By the end of the week she had asked me every night how I would like them done, and every night I had showed her what to do. By the following week she had stopped asking, and would sit in the kitchen and talk to me. I still didn't think I was her carer...

The day I came home and mum had bought a kitchen without remembering it, was the day I exercised the financial power of attorney. I found the brochure on the table and they were due to start on Monday. She had paid £24,500 on her credit card - she had no idea what she had done.

Fortunately, the bank agreed to stop the payment because I had joint bank accounts with mum - something we had initiated as a half-way house because we wanted her to retain her independence and still be able to use her money as she wished to do so. I still didn't think I was a carer...

Finally, after three long years, our house was ready to move back into and I went about finding carers to live with mum. At this point I knew that no one else would be able to look after her as I had, but it was only when the care agency asked me what mum needed help with so that they could assess her needs, that I realised just how much I was doing.

I knew that there would come a point when even professionals would not be able to cope, so sadly mum and I agreed to put in place a medical power of attorney; this meant I could make the final choice to move her into a home when the time was right. It was only at this point that I admitted that I had become her carer.

I wish someone had told me...

That the natural ageing process does not always bring a degenerative disease. Many people are able to continue with their day-to-day life and changes are minimal.

Families around them can raise their children and hold down a job whilst also dealing with the reversal of the dependency equation with ease, accepting the changes as a natural part of life's circle. But, for an increasing number, degenerative diseases of one sort or another make it impossible to do so.

I wish that I had been able to have a conversation with someone and be reassured that I was not alone. According to the Alzheimers Society, who represent all forms of Dementia - not just Alzheimers - 800,000 people have been diagnosed with a form of Dementia. This is set to increase, as it is estimated that one million people will be living with dementia in the UK by 2021.

For each of those people, there is a family behind the figures who are trying to come to terms with what is happening to their mother, father, or spouse. The reversal of dependency is more profound and harder to acknowledge.

Help and support for carers

Everyone's reality is different. In talking to others at work, I have come across people who are holding down senior roles and managing both parents being admitted to a care home at the same time. I have also met those whose parents woke up not recognising their spouse and needed emergency admission to a specialist unit, through to those who are just gently ageing and becoming more frail and dependent.

What is clear is that the coverage of support varies dramatically, but everyone you speak to agrees that much more needs to be done. I have been asked to advise colleagues about what is available, and it is hard to do so. The answer always appears to be 'it depends'. It depends upon where you live, what the person is dealing with, and whether there is a charity geared up to help. So, I can only speak for the Wiltshire area.

I have found that Age UK provides great advice and resources, from 'vetted' tradesman lists through to information about equipment you can borrow, such as stair-lifts and wheelchairs.

The Alzheimers Society provides advice and guidance for both those diagnosed and those providing support. In some areas they will help to find respite carers to give you an evening off. In Wiltshire, they now provide a carers pack for families when the diagnosis has been confirmed; they also have a chat room online where you can ask questions, and I believe that they have just started providing a confidential phone service as well.

Finding out what services are available

Social Services will help to provide you with an information pack about what is available in your area, and will sit down with you to create an emergency plan, so that if something happens to your relative and you are not around - perhaps on holiday or non-contactable - the emergency services know what to do and who to contact.

Carers support groups are springing up, and can be a useful source of information about what is available and what you should do next.

What is so unique about My Family Care is that there is finally a service which acknowledges that being employed and being a carer is hard.

Having help - someone to give you advice and someone to talk to - can be the biggest help.